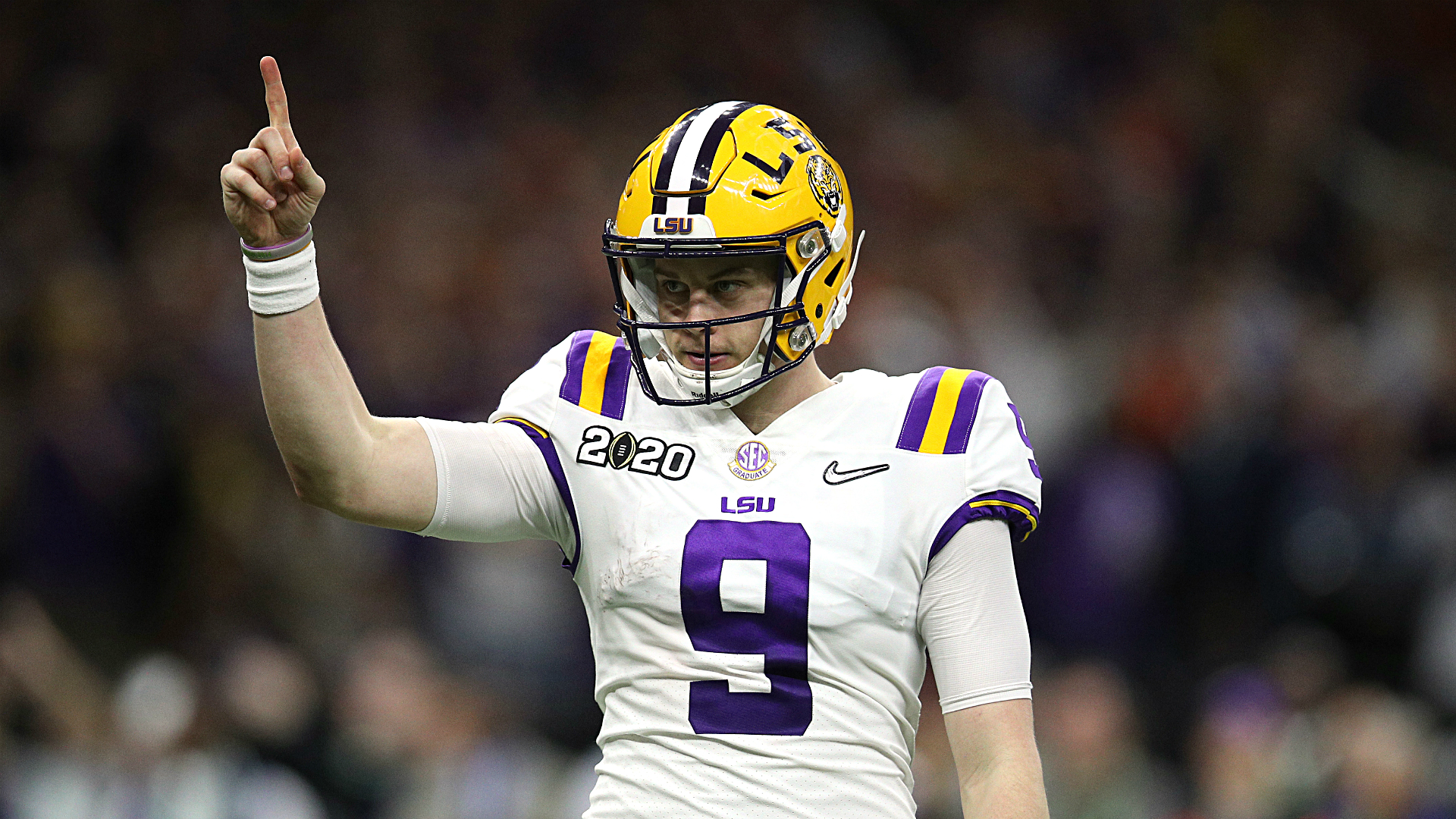 NEW ORLEANS — Perhaps no quarterback defines “right place at the right time” more than LSU’s Joe Burrow. And he proved that with perfect timing on the biggest stage.

Burrow completed 31 of 49 for 463 yards and five touchdowns, adding 58 yards and another score, in No. 1 LSU’s 42-25 victory against No. 3 Clemson in the College Football Playoff championship game on Monday. Yet to quantify what Burrow accomplished based simply on his astronomical statistics would be over-simplify the journey that got him there.

There’s no equation that explains how Burrow represented his hometown, home state and his final college destination.

“I don’t know what else to say,” Burrow said in the postgame news conference. “There’s been so many people that have come into this — that helped me along my journey from Ohio, Louisiana, everywhere. We couldn’t have done it with a better group of guys.”

That’s quintessential Burrow. The former Mr. Ohio Football transferred from Ohio State after three years and endured a tough first season at LSU in 2018 before erupting in a new offense crafted by offensive coordinator Steve Ensminger and first-year passing coordinator Joe Brady, who came over from the New Orleans Saints.

That was part of a total transformation for Burrow, who finished with 5,671 passing yards and 60 passing touchdowns in 2019. It resulted in a Heisman Trophy. It ended in New Orleans, of all places, in such storybook fashion that Burrow was left “speechless.” Yet it was Burrow’s words that will forever be felt in his hometown of Athens, Ohio — especially after the unforgettable speech during the Heisman ceremony that raised more than half a million dollars to local food pantries.

Burrow was put on the spot in the Playoff, and he opened with 515 total yards and eight total touchdowns in a 63-28 romp against Oklahoma in the Peach Bowl semifinal on Dec. 28. In the encore, he delivered in a battle of 14-0 teams against a Clemson program that had won 29 straight games and had future No. 1 pick Trevor Lawrence on the other sideline. It is the greatest two-game stretch in College Football Playoff history: even better than what Deshaun Watson pulled off during his time at Clemson.

Burrow did that with perfect timing in the championship game. After Clemson took the 7-0 lead and forced three-and-outs on LSU’s first three possessions, Burrow responded with a 52-yard touchdown pass to Ja’Marr Chase on a vertical shot play down the right sideline. When Clemson took a 10-point lead in the second quarter, Burrow led a pair of touchdown drives.

The defining play came when LSU faced a third-and-10 with 21 seconds left in the half at Clemson’s 35-yard-line. LSU coach Ed Orgeron called a timeout.

Burrow scrambled 29 yards up the middle for a first down, then threw a 6-yard touchdown to Thaddeus Moss on the next play. That gave LSU a commanding 28-17 halftime lead.

MORE: Where did Joe Burrow transfer from?

When Clemson made one more push to close the lead to 28-25 in the third quarter, Burrow led two more touchdown drives. The last score – a 24-yard touchdown with 12:08 left in the fourth quarter, sent the LSU partisan crowd went into early Mardi Gras mode.

“Callin’ Baton Rouge” blared from the loudspeakers. The JumboTron cut to Burrow, who encouraged the LSU band as it played “Neck” by waving his arm up and down. Then, he broke out that confident smile that infected Baton Rouge, La, this season.

It came at the perfect time, and left his counterpart impressed. Lawrence — whose arrival came in last year’s 44-16 romp against Alabama in the championship game — finished 18 of 37 passing for 234 yards and no passing scores.

“I mean he’s great,” Lawrence said of Burrow. “He’s unbelievable. I’ve got a lot of respect for him, and just his journey.”

Burrow strolled into the news conference after tossing an unfinished cigar. He was asked about what the min meant for the state of Louisiana, a second home complete with numerous balconies that carried banners that simply read “Geaux Jeaux.” It is the same community support he felt when he led Athens High School to the Division III state championship game as a senior.

“This doesn’t happen,” Burrow said. “This doesn’t come around every year. This is a special group of guys that really came together, and it’s as close a group as I’ve been around.”

It’s a group that will be remembered, too, with Burrow in the lead role. He’s the one who transformed LSU from a program that was second place to Alabama to a team that will be thrust into the conversations about the all-time greatest teams.

With that comes eternal celebrity. Burrow will be placed in the debate of greatest seasons in college football history, and his next home might be back in Ohio as the No. 1 pick of the Cincinnati Bengals in the 2020 NFL Draft. At least, he should be. Burrow might be the right quarterback at the right time for that franchise, too.

In the moment, Burrow was asked if it was time to reflect on the aftermath of what he accomplished at LSU.

“Not yet,” he said. “We’re still celebrating. Give us a couple days. We’ve got tonight. We’ve got the rest of this week. We’re going to enjoy this one.”

With that, Burrow exited the podium, returned to the locker room and put out the victory cigar before looking at the No. 9 that will live on forever in LSU lore — once again, with perfect timing.

0
Took me a few minutes to see past the bad art, but this is chopped together incorrectly and mislabeled.P13 (the same way as...
Read more
Sports

0
Photo: AP Photo/ Evan Vucci (AP)Less than a week after being booed at Game 5 of the World...
Read more
Sports

Can the ‘Big Three’ be budged? How the men’s title has gained lustre in Melbourne

0
Jason Garrett wasn’t out of a job too long. The Giants are planning to hire Garrett as their new offensive coordinator, a...
Read more
Sports

Klopp: Aside from injuries, I can’t see anything stopping Alexander-Arnold

0
The Liverpool boss has heaped praise upon a defender who has played a key role in his side's recent success, describing him...
Read more